Innovations Ahead of Their Time - Success is Hard Won

As highlighted in my previous blog, MacLellan Rubber employees have never been short of ideas, sometimes they have been short of common sense, but then who is to know if the next idea will be the catalyst for an entirely new industrial application.
Before returning to our previous theme of Why oh Why did they think that was ever going to sell ! or as I now think of it, the Youve Been framed of MacLellan Rubbers history, I wanted to take a different path and look at some of those inventions that clearly were not right for the time but appear to have spawned if not an entirely new branch of business, then certainly created a new market sector.
What about this as a clearly recognisable piece of everyday PPE for workers across the globe.

Yes, what you are looking at is probably the original Moulded Rubber Ear Plug, Patented in 1935.
I think it is fair to say that this was an innovative product so far ahead of its time that it took another thirty or forty years for the Health & Safety guys to latch on to its benefits and the legislation to protect workers to catch up how many damaged ears would have been saved in the interim if this product had been developed and adopted by industry? And how many arguments would have been saved if partners had been able to hear the request to take the rubbish out, or walk the dog etc etc could this failure to take this product forward have stunted social development could it have stopped nations going to war we will never know.
Back in the real world, whilst the technology as far as materials used have moved on significantly the design of modern ear plugs is pretty much the same as that envisaged by the development team at MacLellan Rubber, Glasgow in 1935. What they obviously didnt foresee was the multimillion pound global sales potential. Else we would still have a patent today.
On a similar Health & Safety theme and perhaps as a consequence of the altruistic nature of MacLellan Rubber and its employees the following patent was submitted in 1952 for an original concept in Knee Protection for the working man.
All of the elements are there cushioned pads at the front flexibility of the system locking mechanism for holding it around the knee joint. As with the Ear Plug we can recognise many of the features described in this patent are used in currently available products but improved with the use of modern materials. 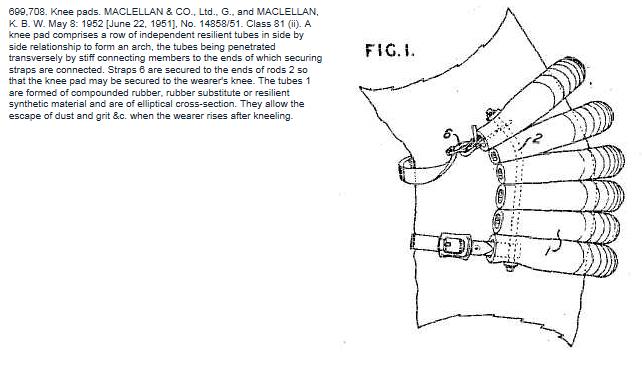 Doing the right thing for the working man has been a theme in many of the products developed by MacLellan Rubber and its highly motivated employees as indicated by the Rubber Ground Sheet Cape and Overshoe for Plaster Casts mentioned in my previous blog and it carries on today with the development of our range of Anti-Fatigue and Non-Slip Matting for standing workers and high risk environments and the introduction of advanced Electrical Matting to BS EN 61111
Everyone is capable of creative thinking and visualising a concept that could change the way people work, react, or play. Getting them down on paper is what stumps many of us, having the courage to put them out there for people to judge is even more difficult.
For businesss, seeing the potential for new products which are revolutionary in their own way and that could take that business in a different direction, that is more challenging and potentially ground breaking is one of the biggest obstacles to overcome.
At MacLellan Rubber we constantly review our Rubber Sheet product offering and associated products identifying new polymers, developing new processes for manufacture, and trying to spot market trends. We discard many ideas and move forward with some ultimately we are successful at introducing only a few.
The investment in time, resource and hard cash can be substantial but we all know that in business, standing still really means you are going backwards, and failing to take risks on new ideas and product development results in stagnation and ultimately failure.
So find that idea, that spark and give it a go who knows what the next great idea will be and in the immortal words of Del Boy this time next year we could all be millionaires

The use of Rheometers in Rubber Compound Quality Control

Save The Children Christmas Jumper day