There is a lot of rumour about BS921 in the market with users being told that the standard has been withdrawn and cannot be used, sold or manufactured.

This statement is incorrect and MacLellan has consulted the British Standards institute at a senior level and can now answer your questions with quotes directly supplied to us by the BSI.

BSI says that the announcement with regard to the withdrawal of BS921 will be published in our Update Standards magazine that goes out to all Members. It can be viewed free at BSI Update standards Magazine. The Announcement will give any interested parties the opportunity to comment on the proposed withdrawal until November 30th. A Final decision will then be made at the beginning of 2013 and will be announce in due course in Update Standards

If BS921 Standard is withdrawn does this mean that BS921 Matting can no longer be used?

With regard to withdrawn publications, BSI says they are not considered current and do not have the status of British Standard, but whether they continue to be used or not is a contractual matter between the parties concerned. Users would need to consult all interested parties (customers, insurance companies, suppliers etc) as to what they consider acceptable.

BSI goes on to say Please note that British Standards are published for voluntary use. Whilst these might support UK Legislation and regulation they have in themselves no regulatory status. Therefore the application of a standard is a contractual matter between the parties concerned, unless mandated by national or European Legislation. You can find further information about UK legislation at legislation.gov.uk and European legislation at Access to European Union law

What Standard is replacing BS921?

BS921 has not yet been withdrawn

BS921 will not be withdrawn until the beginning of 2013 at the earliest.

BS921 even if withdrawn can still be used and we believe the new standard will take time to filter through to the market. Those of you with extensive knowledge of the rubber trade will probably be aware that standards that were withdrawn decades ago are still used on a regular basis today.

The standard 6mm Electrical Matting tested to 11KV and typically used for applications up to 450V is not covered by the BS921 standard and will also continue to be available from MacLellan Rubber.

What is MacLellan doing about this?

MacLellan will continue to manufacture material to the BS921 standard for as long as its Customer base requires the material.

MacLellan Rubber already manufactures and can offer to its wider customer base BS EN 61111:2009. Please see later news articles detailing the variances of this product to be released shortly

MacLellan Rubber will be talking to its regular users of BS921 to work out the best way forward on an individual basis.

As always should you require any further clarification, our sales team are on hand to offer assistance and can be contacted by phone on 01902 307711 or via our contact form. 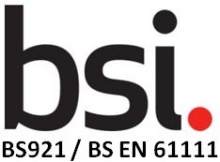