MacLellans has recently provided rubber matting for BC One Crossfit, who are hosing their first Valentines inspired Charity at Walford Works, Longford Road, Cannock this coming Sunday.

The Valentine Throwdown charity event will see 40 men and 40 women go head to head in teams of 10 taking part in various Crossfit strength and endurance challenges. CrossFit, originally from America, covers a broad spectrum of fitness with workouts are typically short, varying between 15 and 45 minutes. Money is being raised for the Missing People charity and Valentines Day cupcakes are being made and sold to raise funds. Ian Stanley Owner of BC-One said that he wanted to tie the Valentines Day event in with the businesss first-year anniversary, and will welcome anyone who would interested in joining BC One to come along on Sunday to cheer the teams on. 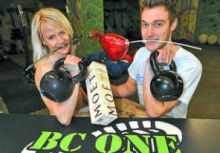